Everyone’s favorite game is commenting on whether Kaya looks more like Tommy or more like me.  We got a hold of a few of our baby pictures and compared them to similar pictures of Kaya.  You be the judge!

Tracy as a baby on the left, Kaya on the right

Kaya has officially developed a “social smile,” and boy is it cute!
We love you too baby girl 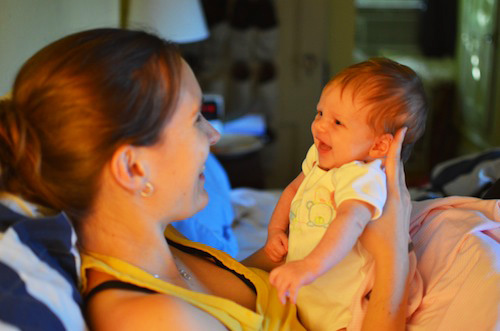 Working at BIDMC gives me the wonderful ability to get tickets to Red Sox games for $5 each, and we typically go a few times each year.  Today Kaya came along and experienced the Fenway magic for the first time.  We had tickets high along the third base line, and somehow got the disability-friendly seats, so we had our own spacious section with real chairs and ample room for nursing and changing diapers.  Although the Sox have no hope of reaching the playoffs, we were lucky enough to see the Orioles play, who are deep into a bid for a playoff spot and potentially a division title.  The O’s fans were louder than the Red Sox fans often, and the Orioles pulled out the win in the 12th inning.  Kaya insisted on staying the whole game, as she isn’t allowed to watch TV at home and would otherwise never get to see the highlights.

I’ve recently decided to actually learn how to cook.  We’ve been eating a lot of crock pot meals and we’re slowly expanding our repertoire.  Today, I cut up some beef, carrots and potatoes and added a bunch of spices and put it all in the crock pot.  When we returned home 5 hours later, I realized that it is important to actually TURN ON the crock pot in order for your meal to happen.  So, I was tired and upset and Tommy says, “I know what will cheer you up.”  He led me into the other room and sat me down.  Twenty minutes later, he appeared with popovers!  I had never heard of a popover until I moved to Boston – for those of you that don’t know, it is a light, delicious egg pastry served at afternoon tea with homemade lemonade on a porch in the sun.  A popover is to a muffin like a crueller is to a donut.  Tommy’s popovers are as good as any I’ve ever had, including the famous popovers of Jordan Pond in Acadia National Park (where I was first introduced to popovers).  Perhaps I should forget to turn on the crock pot more often.

Cost of signing up for a gym membership: $29.99
Monthly cost of gym membership: $89 (yes, it’s the nicest gym in the world)
Childcare at the gym: $6 per hour
Parking on the street outside: $1 per hour
Feeling like a person again by working out AND showering while someone else watches the baby: Priceless

Kaya hiked her first portion of the Appalachian Trail this week.  She also enjoyed the beautiful scenery of Vermont in September (mainly by napping on the porch instead of the living room).  Many thanks to Laura and Dylan for being excellent hosts and helping take care of Kaya. Tommy came up for the weekend and we spent Sunday at Dylan’s grandfather’s old hunting cabin at Tinmouth Pond (which they refer to as “camp” – apparently it’s a New England thing to call your cabin by the lake “camp”).  Max reaffirmed his love-hate relationship with his new immigrant cousin Piolina.  And Kaya outgrew her newborn diapers.  Overall, a fine time was had by all.

Just an FYI to our blog groupies (aka mom), the gallery is now officially up to date with all of our recent pictures.  Go nuts! (Link above)

Laura and Dylan came to visit on their way back from Maine.  We spent a couple of days in Boston and then headed up to Vermont to show Kaya a good time.  The ride up was a bit crowded but we got there eventually!  The dogs rode in the trunk and the suitcases rode on the roof. We thought about letting the dogs ride on the roof but we heard recently that that is typically frowned upon.

I’m pretty sure that Kaya fits into the category of  a “good” baby.  She doesn’t cry all that much and is overall pretty happy.  However, occasionally (typically in the evenings) she gets worked up and it takes a little while to figure out how to get her to stop crying.  First, I try to feed her.  When that doesn’t work, I go through my list of other possibilities and typically this includes a diaper change.  She will usually increase her crying during the diaper change as usually that’s not what’s ailing her.  However, sometimes mid-change, she will suddenly stop crying.  You might think that this would be a good thing.  But, after 5 weeks I’ve finally learned that this signifies impending urination.  My lesson to you: If the baby is screaming and stops during a diaper change, she’s about to pee all over herself and all over the changing table so make sure she’s got a diaper under her.  I learned this the hard way.  About 10 times.

Today was the annual HMED picnic at Larz Anderson Park in Brookline.  HMED stands for hospital medicine and is the name of the hospitalist group at BIDMC for which I now work. I knew that many members of our group have had kids in the last few years, but I was SHOCKED at the sheer number of kids in attendance.  The group has about 45 hospitalists, and there must have been 10 babies present under 1 years old and many more kids less than five.  Here’s a picture we took of all the kids (and many of the parents to hold the kids). 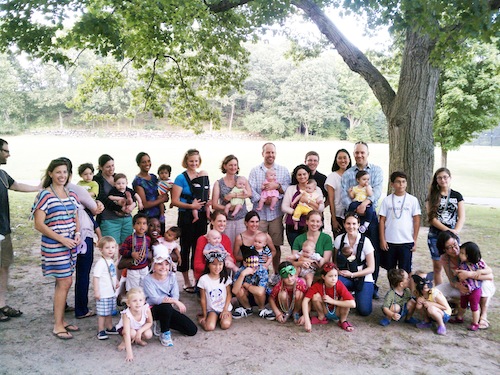