Maggie and I have settled back into Duke 5200 – this time we have a purple room on the right side of the unit, instead of a yellow room on the left. The parent “bed” (read: bench) seems less forgiving than I remember, otherwise, the room is pretty much the same as last admission.

Maggie had her pericardiocentesis this morning – they took off 50cc, which doesn’t sound like that much, but in my review of the literature, it’s maybe on the small side of average for effusions that get drained in a kid her size (5cc/kg). She did fine with the procedure, although was pretty cranky the rest of the day (from anesthesia? or having a drain in her heart? or being back in the hospital? or being tired from partying all night last night instead of sleeping? all of the above?). I read a few papers on post transplant pericardial effusions – they are more likely in young kids (<2), cord blood transplants, kids on cyclosporine, and maybe more common in kids with metabolic syndromes (the metabolic syndrome correlation is in the same direction in all the papers but not ever significant due to power – someone needs to do a meta-analysis. Someone other than me). Interestingly, one of the papers states that all the kids with effusions had vomiting beforehand, which doesn’t make any sense to me (and her team of docs here doesn’t think it’s related), but maybe is why she has been so pukey lately. I see absolutely no difference in her symptoms so far after drainage though. Anyway, we are here until her drain stops leaking fluid and we are settling in for the long weekend.  Here is Maggie pre-procedure today while she was still happy.

Also, Maggie was readmitted to Duke 5200 today. She has a pericardial effusion, i.e. fluid build up around her heart. Per Maggie’s doctors, this is most likely “immune-mediated” meaning it’s caused by an off-shoot of her new immune system getting confused about all these funny looking heart cells and recruiting fluid to the area to help get rid of the pesky heart. It’s a lot like puss surrounding a splinter, except it’s on a larger scale.

The next step is to mechanically drain the fluid using a tube, which is a surgical procedure. Also, since fluid will continue to develop, the tube will be left in so it can be used to drain more fluid periodically. All of this boils down to more time in the hospital on 5200. Out of the ~463 pediatric transplant patients at Duke in recent years, approximately 10% had a pericardial effusion side effect such as this.

The family is starting Ballet! Never to early to start building the love of dance.

I spent the morning doing hair, and the girls were super excited.

Thank you Gammy for finding all the outfits! 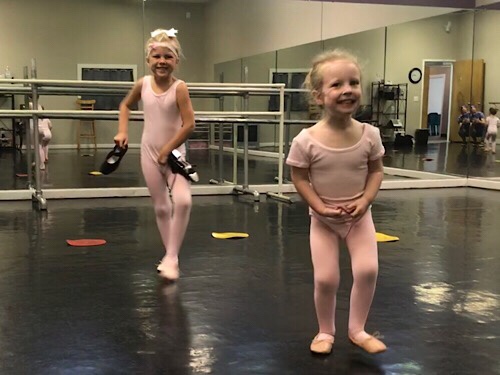 We were SO excited to have pleasant weather last night and Maggie could not wait to go for a walk outside. If it’s too hot, she gets too short of breath to spend any time outside (I freak out when her breathing gets super labored and bring her back inside) and she can’t be in any direct sunlight. So last night was the first opportunity in months for her to spend more than a few minutes in the fresh air. And she was SO happy. She is so sick of our little apartment and walked holding my hand for farther than I’ve seen her walk in the last week or two. She is still a little bit pukey and sleeping more than before, so it was nice to see her happy and active. Fall cannot come soon enough. Summer is typically my favorite season, but I am ready to put summer 2018 behind me. 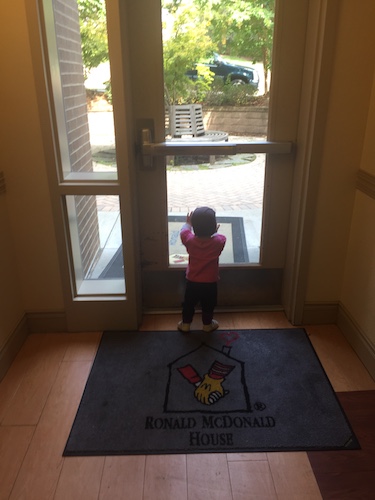 Some good (but a little complicated to explain) news on Maggie’s bloodwork yesterday. I’m learning a lot of this as we go, so I’ll share some of that.

Maggie’s white blood cell count went up without drug assistance from 3.2 to 4.3, which is a great number. The threshold for treatment (for Maggie) is 3. So, to start above 3, and then climb way out of the treatment range is a great sign.

The percentage of Maggie’s white cells that were Lymphocytes was 33%. The typical cord blood transplant child that is 62 days post-transplant would be about 3%, so she is WAY ahead of the curve here. Great news. She’s also doing this while on a drug called Gancyclovir that has known marrow suppressive side effects. (She’s on Gancyclovir as an anti-viral because she has an active viral infection called CMV).

For the future: One type of lymphocyte is the CD4 T cell. These are the same types of cells that you’ll hear people talk about for patients with AIDS. One of the next major hurdles that we’ll try to cross in the transplant process is a CD4 count above 200. We haven’t even measured her CD4 count yet. That first test will happen somewhere around day 100 post-transplant. When the CD4 count hits 400, that’s when Maggie can safely weather a viral infection.

Shown here is Maggie interacting with a 3d model of a blue shark lymphocyte.

When Tommy and I planned our wedding, we argued about very little. All the details we either agreed upon, or one of us didn’t care enough about to argue. But we both wanted a wedding picture with the chapel in the background and one of the only things I can remember disagreeing about was whether to take the picture at the Campus Dr/Flowers Dr circle, or on Chapel Dr closer to the chapel. I think I ended up getting my way (the closer picture), and then regretting it and wishing I had the distance picture. Well, Maggie and I went for a run the other day after it cooled off (I ran, she stroller-ed) and stopped at the Campus Dr circle to shoot a picture of our own. The chapel is pretty tiny in the background though…so maybe I was right after all. 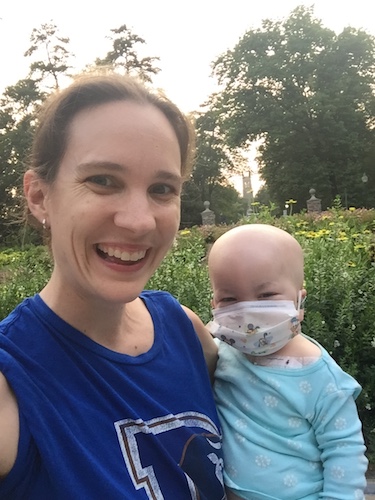 Kaya, Laney, Tommy, Yoya, and Dylan went camping out past Asheville this weekend. Sounds like it was a bit of a wet choice of weekends, and they sounded pretty tired Saturday evening, but I got lots of picture texts that looked like they at least had a little fun at a local folk festival. We’ve had a quiet weekend here – Maggie is feeling pretty ‘blah’ today with barely a smile, so hopefully she is not brewing anything more serious. I am enjoying her double nap, though!

No big news from the Rose front in the last few days. Maggie is still doing fine, although had 24 hours or so of decreased appetite and vomiting of unclear cause, but she kept her weight/labs stable and never stopped smiling. She has really grown up a lot in the last few weeks and it’s nice to see her progress a little bit in terms of language and locomotion. She will now walk with only one hand of support, which seems to approximate the right walking posture. She turns full teenager twice a day and zones out to the Ipad while I hook up her meds. And I haven’t seen the other girls for over a week, although Kaya is feeling better and Laney only has a cough. They are headed out to the western part of the state this weekend for a late summer mountain getaway with Tommy, Yoya, and Dylan.

Found this picture gem in the “Duke Pediatric BMT Family Support Newsletter,” in which Maggie is heavily featured. I am pleased that it feels like this was already a long time ago. Tommy made buttons one day (while Maggie was in the hospital) with the BMT family support team and brought them home for the girls. But, it turns out the nurses all wear buttons of their patients and there’s a bit of an unwritten rule on 5200 that you are supposed to give a button with your kid to your primary nurse and favorite nurses. We unfortunately broke this rule, because we didn’t have any buttons left, and didn’t make any of just Maggie. And then I never got it together to make more buttons (Maggie tended to sleep through button-making hour). There are lots of unwritten rules on 5200 and I’ve actually considered making a new binder – there is an official Parents’ Handbook, but they really need an unofficial one. Things I would include: 1) You are supposed to make a button for your favorite nurses/primary nurse, 2) To silence an IV beeping, hit the yellow button on the middle screen of the IV pole, 3) Food service is a nightmare and there is lots of food you can order that is not on the menu you are given, 4) Steve the sharps guy is super nice and you should befriend him and he will make you a wood carving, and 5) If you ever go to the PICU, ask for room 9 or 10.

Thankfully no big updates here. Maggie has had a mild GVHD rash that is exquisitely sensitive to sun, so she is relegated to long pants/shirts and staying inside with shades drawn for the rest of the summer. She remains a fast breather, but is otherwise doing pretty well. Her platelets finally hit 51 yesterday, so she has officially engrafted them, although I wouldn’t be surprised if they go back down based on the slow speed of rise. The biggest news is that Subdivision #1 of the family has at least one communicable disease – Kaya has a fever and Laney has a cough. So that side of the family is officially quarantined. It makes me extra glad Maggie and I decided to stay at Ronald McDonald House, although it also means that Tommy is exposed and probably shouldn’t visit for a while and I am going slowly crazy singing “Itsy Bitsy Spider.” Yoya and Dylan have visited a few times to allow me some adult conversation, as has Baba and Gammy. Here’s my little warrior in clinic yesterday when she found out her platelets were >50!